Expert reports on COVID-19 situation in dental clinic in Wuhan

In an online presentation, Prof. Zhuan Bian explained how his clinic in Wuhan in China had reacted to the outbreak of the SARS-CoV-2 pandemic. (Image: German Association of Oral Implantology)
Back to news
By Franziska Beier, DTI
April 07, 2020

WUHAN, China: As dean of the School and Hospital of Stomatology of Wuhan University, Prof. Zhuan Bian has had first-hand experience of the working situation of dentists and dental staff in the city of Wuhan, the capital of Hubei province, where SARS-CoV-2 reportedly first broke out. In an online webinar, organised by the German Association of Oral Implantology, he described how the COVID-19 pandemic had changed the daily workflow of his team, and he shared insights about the infection control procedures which he regarded as most important for dental professionals.

According to Bian’s presentation, the first patient carrying the new virus, officially named SARS-CoV-2 by the World Health Organization (WHO) at the beginning of January, was hospitalised in mid-December 2019. Owing to the rapidly increasing numbers of infected patients, the National Health Commission of the People’s Republic of China assigned COVID-19 to the category of infectious diseases Group B on 20 January, which meant that heightened prevention measures were required for all health workers. Three days later, the lockdown of Wuhan city, which has more than 11 million inhabitants, started, followed by the institution of a policy that only dental emergency treatments were allowed to be performed. Private dental practices throughout China were closed in accordance with the epidemiological situation in each area. However, private practices outside of Hubei province have now gradually resumed their work.

As reported by Bian, 3,000 healthcare workers, including dentists, were infected in China by 25 February. He explained that dentists and dental staff have a high risk of contracting SARS-CoV-2 owing to close contact with their patients, possible spatter of patients’ secretions, saliva or blood, aerosols generated by high-speed handpieces and ultrasonic devices, and pathogenic microorganisms attached to the various dental instruments. 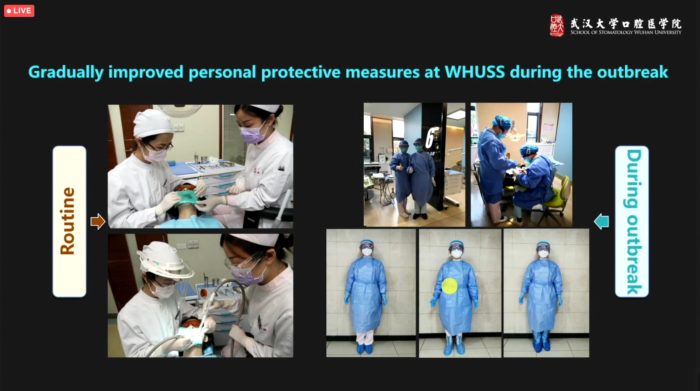 A screenshot from Bian's presentation shows how protective measures in his clinic have been increased after the outbreak of SARS-CoV-2. (Image: Zhuan Bian)

To protect employees, the precautionary measures in Bian’s clinic were increased. During treatments, dental staff wore extensive protective clothing such as medical masks, caps, gloves, goggles or face shields, shoe covers up to the knee and surgical gowns. Procedures which generated spatter or aerosols had to be avoided or at least minimised. In case of the necessity for such a procedure arising, Bian recommended the use of dental dams and high-volume saliva ejectors. Since intra-oral radiography stimulates saliva secretion and coughing, he said it should be replaced by extra-oral radiography.

“Our dental community is especially worried about aerosols. Aerosols containing the virus would be very dangerous. So far, I have not found any evidence in the literature that aerosols containing the virus have affected people. Of course, I have no evidence to deny that, either. So, this makes it very complex. In case aerosols contained the virus, we put off our air conditioner so that it did not spread air from one room to another, and in our emergency department, we sterilised the air twice a day,” said Bian in the discussion after the presentation.

In answering the question of whether any specific mouthwash might be more effective in killing off SARS-CoV-2 than another, Bian replied: “So far, we do not have any data about which rinse is better, but I think a rinse will dilute the possible concentration of the virus in the oral cavity. So, it may be helpful, and we provide our doctors with it.”

The medical staff of the School and Hospital of Stomatology of Wuhan University are regularly examined for COVID-19 symptoms and their temperatures are measured. Anyone who shows respiratory symptoms is taken off the work shift for the time being. The same applies if family members of employees show such symptoms. In addition, an emergency care work log of treatments has been established in order to be able to trace the transmission path in the event of a SARS-CoV-2 infection.

“It is almost impossible to distinguish between asymptomatic and non-contagious patients. So protective equipment is very important”

Effective from 22 January, the Wuhan government released an official statement which obliges management teams of all public places to require all customers to wear masks before entering. Therefore, patients are instructed to wear mouth protection before their treatment and afterwards. In addition, their temperatures are taken and their general condition checked.

“It is almost impossible to distinguish between asymptomatic and non-contagious patients. So protective equipment is very important,” emphasised Bian.

Just like in many other countries, important dental shows have been cancelled or postponed in China owing to the COVID-19 pandemic. As reported by Dental Tribune International, the World Dental Congress, which was scheduled to take place in Shanghai from 1 to 4 September and which is organised by FDI World Dental Federation, has been called off.

The Dental South China International Expo 2020, which is celebrating its 25th anniversary this year, has been postponed to a later date. It was originally planned to take place from 2 to 5 March in Guangzhou.

Dr Michael Yu, editor-in-chief of Dental Tribune China, told Dental Tribune International that, even though dental practices in more than 20 provinces had gradually resumed their work in mid-March, many Chinese dentists had suffered financial losses because they had been unable to generate much income during February and March.

He reported that online training through Weibo, a social media platform, had become very popular among dentists during their home quarantine. A great deal of information had been provided by various suppliers in training webinars. He said that there had been more than ten webinars on at the busiest time every day, seven days a week.

MELBOURNE, Australia: One of the most important functions of the Dental Board of Australia (DBA) is the development of standards, codes and guidelines for dental practitioners. To help make information on registration standards more accessible for dental practitioners, the board has now launched an information hub titled “Know your scope”, ahead of the implementation of the revised scope of practice registration standard on 1 July 2020.

At this year’s Chicago Midwinter Meeting, 3DISC is showcasing the latest updates to the Heron IOS, the company’s flagship intraoral scanning solution. Dental Tribune International spoke with Thomas Weldingh, 3DISC CEO, about how the company is aiming to cater for practices interested in digital dentistry.

AUCKLAND, New Zealand: After a number of offers, the directors of Abano Healthcare Group have capitulated to a bidder and entered into a scheme of arrangement for a takeover of its extensive network of dental offices across Australia and New Zealand. If approved, the takeover bid would see an entry into the dental market in Australasia by the former majority shareholder in the largest dental support organisation (DSO) in the US.

SAINT-MAUR-DES-FOSSÉS, France: Launched nearly ten years ago, Biodentine has become a must-have product when it comes to vital pulp therapy. Acknowledged by more than 600 publications worldwide, Biodentine has allowed millions of teeth to be saved from around the globe. Today, a new door opens for teeth showing irreversible pulpitis–a condition that until now had doomed teeth to root canal treatment.