The most ergonomic position for the dentist is when the head of the horizontally lying patient is positioned at chest height in the middle of the sagittal plane. (Image: RossHelen/Shutterstock)
Back to news
By Franziska Beier, Dental Tribune International
December 14, 2020

DÜSSELDORF, Germany/HONG KONG: Since the number of female dentists has steadily increased over the past decades, their needs in the field of dental ergonomics have come into focus. The female breast and varying bra cup sizes play an important role, as they often prevent the dentist from adopting a symmetrical upright working posture during patient treatment. A joint project by the Arbeitsgemeinschaft Ergonomie in der Zahnheilkunde (German academy of dental ergonomics) (AGEZ) and the Hong Kong Polytechnic University (PolyU) is being undertaken to establish criteria for the production of a bra which will ensure a healthy working posture and an unobstructed view of the patient’s oral cavity. In order to develop a product that meets the needs of female dentists and dental nurses, the researchers have created a survey and would like to encourage as many participants as possible to provide feedback. 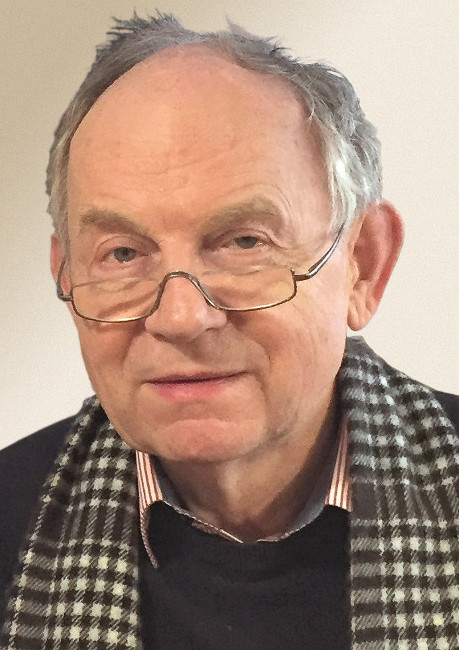 Because he is aware that dental ergonomics has been mainly focused on ergonomics from the male perspective, project initiator Dr Jerome Rotgans, chairperson of AGEZ—a subject group of the German Society of Dentistry and Oral Medicine (DGZMK)—and an adjunct professor at the RWTH Aachen University Hospital in Germany, thought it was time to proactively change this. In 2019, the annual conference of the AGEZ addressed ergonomics for female dentists. In preparation for his lecture at the conference, Rotgans found that data concerning the physical and mental resilience of women has not explicitly shown the female breast to be a potential cause of an unhealthy working posture. “It was my intention to break this taboo,” he told Dental Tribune International (DTI) in an interview.

According to project partner Dr Kit-lun Yick, associate professor at the Institute of Textiles and Clothing at PolyU, wearing unsuitable bras causes uneasiness, anxiety and even embarrassment. When asked what motivated her to join the project, she told DTI: “It is a meaningful project. Traditionally, the intimate apparel industry only focuses on the design of everyday bras and sports bras. We rarely investigate the different needs of professional women in the bra design and development process.”

Why the need for an ergonomic bra for female dentists?

The most ergonomic position for the dentist is with the head of the horizontally lying patient positioned at chest height in the middle of the sagittal plane. However, dentists may neglect this posture if the view into the oral cavity is limited by the breast, resulting in an unhealthy working posture for several hours a day.

Especially for those with larger cup sizes, wearing a bra will lift and partially move the breast laterally. According to Rotgans, both of these aspects are regarded as ergonomically very harmful. “Lifting increases breast prominence. This obstructs the line of sight of the treating dentist, who will compensate by bending forward causing extra strain on neck and shoulder muscles. Lateral movement will spread the upper arms causing additional strain on shoulder muscles,” he explained. In addition, shoulder straps may obstruct blood circulation and cut into skin, resulting in muscle tension and extreme discomfort.

Sitting backwards and bending forward are also postures used to avoid contact between the dentist’s breast and the head of the patient. Currently available products, such as wired or compression bras, do not address the ergonomic needs of female dentists but rather increase physical problems, said Yick. 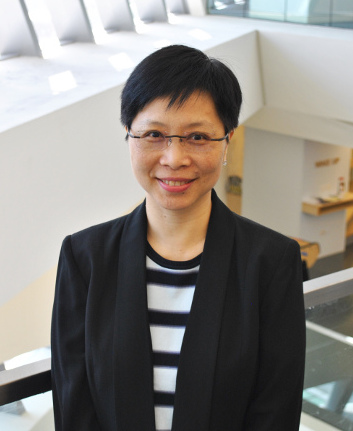 In his search for research partners, Rotgans found PolyU, which offers a degree in fashion and textiles with a special focus on intimate apparel. After a first unsuccessful attempt to initiate the project in 2019, Rotgans contacted the university again in May this year. This time, he was presented with a first project draft within a few days, and the first project phase started in July. The task of AGEZ is to recruit participants for the survey, which has already happened with the support of the Hong Kong Dental Association. Now, a second round is being conducted with the help of DTI. The role of PolyU is to perform experiments that will provide suitable solutions in bra design.

These experiments will include bra evaluations. Their design features, material properties and the interface pressure between bra and breast at various areas—such as shoulder straps, underarms and upper back—will be studied in different bras. These will include everyday bras, compression sports bras and encapsulation sports bras. The pressure studies will be done via a pressure measuring system. With the help of 3D body scans, the corresponding changes in breast shape will also be measured.

“A prototype bra which aims to minimise breast displacement and prominence during dental treatment will be designed and developed. To achieve this, materials selection and pattern making will be systematically studied. The experiments will be repeated and the overall comfort of the bra prototype will also be considered by a subjective wearing trial,” explained Yick. 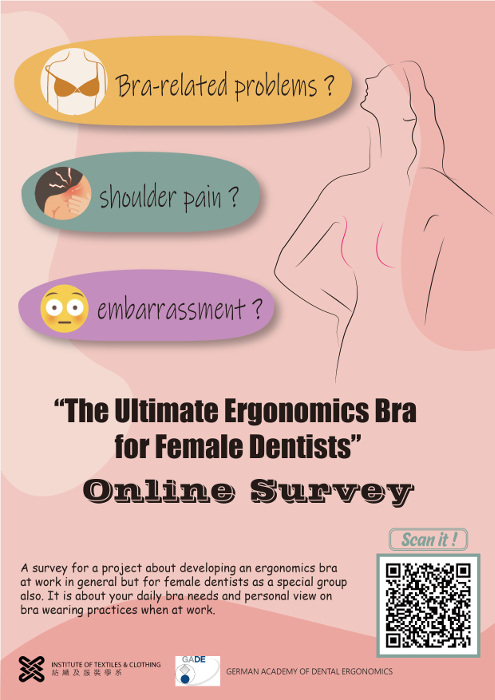 In order to design a product that addresses the needs of female dentists in their daily practice, the researchers are depending on their cooperation. (Image: AGEZ/PolyU)

The bra prototype is expected to be designed and developed by April 2021, and its dissemination will be handled via industry meetings. The finished product is expected to enter the market within three to five years, and the cost is estimated to be similar to that of currently available functional bras.

Yick gave an outlook on the impact of the product on dentistry: “With the increasing prioritisation of health and well-being in the work environment, the project will have a positive long-term impact on a large percentage of female dentists by offering adequate breast support and control of breast protrusion.”

Rotgans added that the product could also be used in other professions: “In any job where a large cup size might be an obstacle. For example, in the police, security services and the military, especially when bulletproof vests have to be worn.”

Since the ergonomic bra will be developed by means of data provided by a questionnaire, Rotgans and Yick are inviting female dentists and dental nurses from around the world to provide feedback on their daily bra habits with a special focus on bra-related problems during patient treatment. The questionnaire, which was designed by Giselle Choi, a final-year bachelor student in the programme of intimate apparel at PolyU, concentrates on topics such as working posture, possible causes of discomfort and shoulder straps. Responses will be collected for academic research only and will be kept confidential, and all information will be deleted permanently after the research has ended.

Dentists and dental nurses who would like to participate may find the questionnaire for the ultimate ergonomic bra here.

Research points to benefits of diabetes screening in dental practices

MELBOURNE, Australia: Since World Diabetes Day is set for this Saturday, 14 November, the relationship between diabetes and oral health management may be on the minds of dental professionals. A research project conducted in Australia has confirmed that the oral healthcare setting can play a valuable role in individuals’ systemic health by screening for patients who either have Type 2 diabetes or are prediabetic.

SINGAPORE: For the first time, the International Dental Exhibition and Meeting (IDEM) was conducted online. The event, which was organised for the dental community by Koelnmesse and the Singapore Dental Association, was held from 19 June to 19 August 2020.

SEOUL, South Korea/COPENHAGEN, Denmark: On 31 July, Osstem Implant entered into a global partnership agreement with 3Shape, a market-leading company in digital dentistry solutions. With the agreement, Osstem acquired the rights for global distribution of 3Shape’s TRIOS intra-oral scanner and CAD software. The South Korean company announced that it will launch TRIOS sequentially through its subsidiaries in China, India and the US.

IDEM 2020 to be a digital experience

SINGAPORE: Originally, the 11th International Dental Exhibition and Meeting (IDEM) was scheduled to take place in April 2020 and was then moved to 19–21 June to ensure attendees’ health and safety during the COVID-19 crisis. However, now that the outbreak has become a pandemic and the situation is not expected to stabilise in time for the show, the event organisers have decided to move IDEM 2020 online.