Pandemic causing increase in stress-related oral health conditionsCOVID-19 survivors at an increased risk of salivary gland ectasia and oral diseaseHHS launches portal for potential vaccinatorsThe mouth and SARS-CoV-2: Evidence of infected cells suggests key role in infection, transmissionStudy shows dentistry must adapt to be prepared for future crisesHow COVID-19 has forced us all to relook our practices, lives and goalsCanada invests in Septodont’s pharma division to combat COVID-19EFP survey reveals effect of COVID-19 on periodontal practiceVaccine nationalism poses threat to global healthIDS 2021: The countdown is on
Visit microsite

SEOUL, South Korea: The history of dental implantology dates back to ancient times, yet researchers are still trying solve a number of issues, such as failed osseointegration and inflammation. Researchers from the Korea Institute of Science and Technology (KIST) Center for Biomaterials have now developed a novel method of producing a ceramic artificial bone coating for implants. This method is distinguished by a shorter production process and increased adhesion of the coating.

Owing to enhanced biocompatibility and osseointegration, hydroxyapatite coatings are often applied to biomedical devices that are implanted directly on bone. However, they require a synthesis process in order to manufacture the artificial bone material and a separate coating process, which is time-consuming. In addition, the binding between the substrate and the artificial bone coating layer tends to be weak, resulting in damage or even failure. 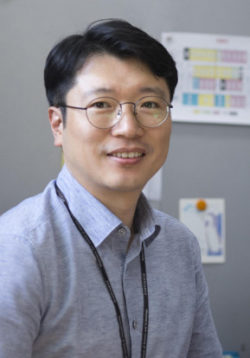 “Hydroxyapatite coating is already widely used. However, when it peels off, it can be seen that the coating layer is ineffectual,” said Dr Hojeong Jeon, principal research scientist at KIST, in an interview with Dental Tribune International.

To mitigate these issues, the research team developed a method of inducing artificial bone coating in only 1 hour using a single process, which does not require separate synthesis of the raw material for artificial bone coating. They positioned the material to be coated in a solution containing calcium and phosphorous and irradiated it with a laser. The temperature was increased locally at the laser’s target site, causing a reaction of calcium and phosphorus to produce ceramic artificial bone (hydroxyapatite) and to form a coating layer.

Compared with conventional coating methods, the new technique creates a coating layer with a stronger binding power. “The coating method we developed increases the adhesion strength. We expect the laser-induced coating to have at least a three or four times higher adhesion strength than the coating layer formed by the thermal plasma spray method,” said Jeon. In addition, the coating may be applied not only to metal surfaces but also to the surfaces of polymer materials, which has not been possible with conventional processes so far.

According to Jeon, KIST is currently working with a South Korean orthopaedic company to optimise the technology for application to products. It is expected to be available on the market in about three years. “The biggest advantage of this new method is decreasing time and cost for the hydroxyapatite coating process while increasing the coating adhesion strength,” he concluded.

The study, titled “Robust hydroxyapatite coating by laser‐induced hydrothermal synthesis”, was published online on 15 September 2020 in Advanced Functional Materials, ahead of inclusion in an issue.

Dental charity’s free treatment gives patients something to smile about

SYDNEY, Australia: Though the spread of SARS-CoV-2 has been relatively well controlled in Australia, access to dental healthcare continues to be an issue in the country. In 2020, to help combat this, a charity associated with the Australian Dental Association ’s New South Wales branch (ADA NSW) stepped up and delivered more than A$300,000 (€185,600) worth of free dental treatment throughout the year.

In Australia, the provision of oral health services for rural and remote communities can be extremely difficult, not least of all because of the country’s immense size. To help combat the inequalities which result, Sydney-based dentist Dr Jalal Khan regularly travels in his mobile dental surgery truck to provide much-needed treatment across Queensland and New South Wales. Khan recently spoke with Dental Tribune International about his vision for the truck and what the response from the dental community has been.

SEOUL, South Korea: On 21 April, Osstem Implant held the first session of its virtual conference, the Osstem Meeting Online, which achieved over 95,000 total live cumulative views from more than 60 countries within 2.5 hours. This series of live-streamed symposia, which create a virtual conference experience for dental professionals around the globe, will culminate in a session on 27 June that will feature a socially sustainable fundraising campaign.

COVID-19: How are Australian and New Zealand dentists faring?

SYDNEY, Australia: Though Australia and New Zealand have, thus far, been able to avoid the worst of the COVID-19 pandemic, both nations’ economies have nevertheless taken significant hits with the partial or complete shutdown of many industries. The impact of this downturn has been directly felt by the countries’ dental workforces, many of whom have had their workloads curtailed by government restrictions.