BEIJING, China: Sales of dental implants are set to grow at a phenomenal rate in the coming years in major dental markets in the Asia Pacific region. The value implant segment is driving volume growth, but still trailing behind the premium segment when it comes to overall dollar value. International implant manufacturers are investing in the value category, and cheaper solutions in implant therapy may be the key to boosting some of the region’s developing markets.

The world’s population is growing by an estimated 82 million people per year, but an increase in candidates for implant therapy is not the only factor driving growth in the dental implant category. The 2016 Global Burden of Disease Study underscored the prominence of the leading conditions behind edentulism. The study found that dental caries in permanent teeth was the most prevalent of the oral diseases that affected an estimated 3.58 billion people globally—half of the world’s population—and estimated that severe periodontal disease was the 11th most prevalent disease on the planet. The category is segmented into dental implants, final abutments, instrument kits, planning software and surgical guides. Other factors driving its growth include an increasing incidence of sports-related injuries, ageing populations, rising demand for prostheses and more dentists being trained to place implant restorations.

According to Global Market Insights (GMI), the global dental implant market was worth US$3.9 billion last year. A compound annual growth rate (CAGR) of 5% will mean that the category increases in value by around one-third to be worth US$5.4 billion (CNY 35.4 billion; JPY 542.2 billion) by 2025. In the Asia Pacific region—the fastest-growing area for dental implants—GMI forecasts a CAGR rate of 6.5% between 2019 and 2025.

According to medical market research company iData Research, which published a new report this year on dental implants in the Asia Pacific region, the region is the third largest for dental implants and currently accounts for 28.1% of the total value of the global market. The market researcher revealed last year that implant sales in the region were expected to experience high levels of growth in the coming years, to be worth US$890 million by 2024, and that the region was transitioning towards inexpensive implant solutions.

In 2018, according to iData, the region’s key dental markets, Australia, China, India, Japan and South Korea, had a near fifty–fifty split in terms of the market value for premium versus non-premium dental implants. The non-premium segment edged slightly ahead to account for 51.2% of market value versus 48.8% for the premium segment. Cheaper implant solutions are expected to hold a 55% share of total market value in the region by 2024, according to iData’s analysts.

Jeffrey Wong, Analyst Director at iData, says it is not that simple. The value segment in the region is experiencing a healthy growth rate and an increase in volume sold, but the contribution of cheaper implants, in dollar value, is much smaller when compared with that generated by the premium implant segment. This trend is expected to unfold in the burgeoning Chinese market and in the lesser-developed Indian market, and significant growth has been forecast for dental implants in both of these countries in the coming years.

“Even though both the Chinese and Indian markets are expected to experience similar rates in market growth, it is worth noting that the Chinese market is nearly four times the size of the Indian market.”

Wong also points out that not all growth rates are created equal: “Even though both the Chinese and Indian markets are expected to experience similar rates in market growth, it is worth noting that the Chinese market is nearly four times the size of the Indian market.”

Despite a lower contribution to overall market value, an increasing prevalence of dental implants being placed will boost visibility and acceptance of this form of dental therapy. 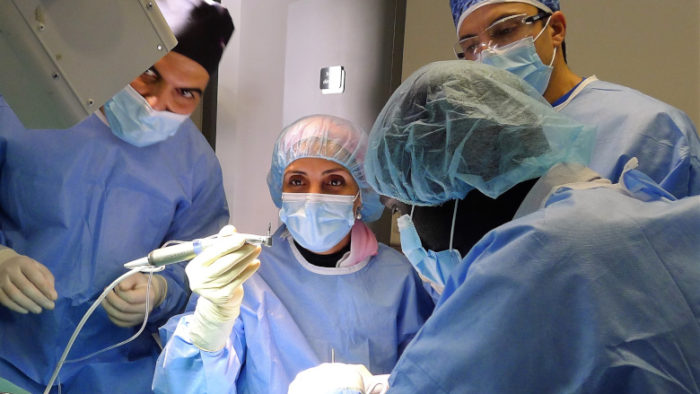 Training and educational activities for dentists placing implant restorations will help to speed up growth in the region. (Photograph: Straumann Group)

Implant manufacturers are planning to do more business in the Asia Pacific region, and iData says the market landscape in the region is becoming increasingly competitive. Major implant manufacturers, such as the Straumann Group, have increased investment in their implant portfolios in key Asia Pacific markets, particularly in the growing non-premium category.

The Straumann Group acquired the popular Indian implant brand Equinox in 2016 and Anthogyr’s Chinese implant business. This year, the company’s acquisitions have continued. The company said in its 2019 half-yearly report that it was investing in the South Korean company Warantec to boost its penetration into the non-premium implant segment. Straumann said that it would provide a capital injection to bolster the established implant manufacturer’s production and international business and would gain in return a stake of just over one-third in the company and the exclusive rights to distribute Warantec implants outside of South Korea. Straumann said that the company’s Oneplant implant system offers affordability in the segment and that product registrations had been obtained in China and in the leading dental implant regions, the US and Europe.

The Asia Pacific region makes up 18% of the Straumann Group revenue and is the company’s fastest-growing region. The company said in its report that it had strengthened its foothold in powerhouse China’s non-premium implant segment by rolling out a fully tapered implant made by daughter company Anthogyr and that it had benefited from intensified training and educational activities in the country. “This is significant because only a very small proportion of the dentist population in China has received training in implant dentistry,” the company stated.

A key enabling factor in the success of companies like Straumann will be a greater investment by dentists in the Asia Pacific region in offering implant-supported restorations. Of course, a vital part of the equation is that consumers are willing and able to invest in their oral health.

In an April interview, Claire Li, Clinical and Scientific Manager at Dentsply Sirona Implants in China, commented that the dental implant market in the country was expanding quickly. “Different sources estimate a growth rate between 15 and 30% in the coming years, and the market is likely to exceed US$700 million by 2020.” She explained that the main drivers behind the rapid growth in numbers of implants placed in the country were an increasing familiarity with implant-supported restorations, more dental practices now offering implant dentistry, and economic factors that are making Chinese more willing to spend money on their oral health.

“Calls have been made in China for the development of domestically manufactured dental implants in order to lower the costs of implant therapy for consumers.”

Earlier this year in China, the Global Times quoted business news portal 21jingji.com as saying that “A full set of implanted teeth could cost as much as a brand-new BMW sedan.” The English-language daily tabloid reported that demand in China for oral treatments such as tooth replacement was surging, but that a lack of domestically made implants meant consumers were paying high prices in a market dominated by international dental companies. The newspaper said that calls have been made in China for the development of domestically manufactured dental implants in order to lower the costs of implant therapy for consumers.

In the South Korean market, larger international dental companies face stiff competition from domestic implant manufacturers, who have helped to transition the market towards more inexpensive implant solutions. But the situation in South Korea also reminds us that growth in the implant market requires investment from other parties. The country’s National Health Insurance Service lowered the age of eligibility for dental implant coverage to 65 from 70 in 2016, which iData says has helped to transform South Korea to the region’s most highly developed market for dental implants.

Europe and the US dominate implant sales

According to iData, Europe and the US still take the lion’s share of the global dental implants market. Europe accounts for 34.3% of the total value of implants placed annually and the US accounts for 29.5%. Together, these two regions hold almost two thirds of the entire market. At 28.1%, the Asia Pacific region is currently the third most valuable for dental implants, followed by the Latin America region at 8.1%.

ANDHRA PRADESH, India: The success of a pulpectomy depends on the elimination of bacteria from the root canal. Researchers have now experimented with a new mixture consisting of propolis, which is a natural product with proven antibacterial and anti-inflammatory properties, and zinc oxide powder as a filling material in primary teeth.

Since July 2014, Mathias Kuepper has been working as managing director of Koelnmesse Singapore, where he, in addition to his other responsibilities, organises South East Asia’s leading dental show IDEM Singapore, which takes place every two years. Owing to the ongoing SARS-CoV-2 pandemic, the on-site IDEM 2020 was cancelled, and it will now be a wholly digital experience in order to ensure the health and safety of staff and visitors. In an interview with Dental Tribune International, Kuepper explained why Koelnmesse has decided to move IDEM online, shared insights into what it took to replan the event and attempted to answer the big question everyone is wondering about: how will SARS-CoV-2 affect the dental industry in the long run?

SYDNEY, Australia: The Australian Health Practitioner Regulation Agency (AHPRA) has launched investigations into four providers of clear aligner therapy amid claims of hushed incentives being provided to dentists and the breaching of advertising laws.

ADA offers advice on how to handle dental scrap

SYDNEY, Australia: The Australian Dental Association (ADA) has recently published an article in which it discusses the best practices for recycling dental scrap. Although many dentists treat it as waste, dental scrap can be recycled by an experienced refiner. This is an environmentally friendly solution that will generate additional income for the dental practice.